By RICK SHERMAN
Sun Advocate Reporter
It has been three years since a one-two punch from Mother Nature ravaged Huntington Canyon, prompting evacuations, jeopardizing the water supply for municipal, industrial, and agricultural users downstream, destroying wildlife habitat, and closing roads, trails, and campgrounds.
The disaster was sparked by lightning which ignited a wildfire on Seeley Mountain on June 26, 2012. The fire quickly spread through drought-weakened and beetle-killed trees, burning more than 48,000 acres of the Manti-La Sal National Forest. After a tremendous and costly effort by hundreds of firefighters with support from air tankers and helicopters, the Seeley Wildfire was contained on July 18. But it left the mountainsides with only skeletal remains of burned trees, and otherwise barren of vegetation- a situation which created an imminent threat of mudslides.
Almost on cue, summer thunderstorms triggered several mudslides on the steep, stark slopes of the burn scar in the main canyon, and in many side canyons. The force of the slides swept along tons of logs and boulders, resulting in massive debris flows that clogged the river and covered SR-31, again and again.
The potential for fire-related debris flows is greatest right after a fire and will decrease as vegetation is reestablished to stabilize burned slopes, intercept rainfall, and buffer runoff. In an effort to expedite that regeneration, the Forest Service launched an aerial reseeding program, but met with limited initial success because of the steep terrain and recurring monsoonal rains.
Now three years later, some areas of the canyon remain closed, but the green is coming back. According to information from Manti-La Sal Forest officials, grass began to show on many slopes just weeks after the fire. Gambel oak and chokecherry also sprouted from deep soils. Wildflowers such as Indian paintbrush, lupine and columbine survive because they resprout from underground bulbs.
Regrowth has carpeted the slopes in grasses, flowers, shrubs, willows, aspen and conifer shoots. That is good news for flood control and according to DWR Wildlife Biologist Brad Crompton, “The best thing that could have happened for deer and elk.” He says the newly-sprouted foliage has resulted in a higher fawn and calf survival rate, especially this year with the wet spring.
The news isn’t as good so far for fish in Huntington Creek. Justin Hart, DWR Aquatic Program Manager in southeastern Utah, says initial efforts to restock the creek have been hampered by unstable conditions. The Division stocked Brown Trout fingerlings in periphery streams in July 2014, but based on results at a sampling site near Old Folks Flat, Hart says, “We haven’t documented much success.” He says Brown Trout and Cutthroat Trout fingerlings were stocked this past spring as well, and will be sampled later this year. Hart says since flooding has decreased, the latest effort looks promising, and he predicts, “Fishing will be top quality in three years.”
The debris has been cleaned up; roads, trails, bridges, and other structures in the canyon have been repaired, rebuilt, improved. The Huntington Canyon Emergency Watershed Protection project added flood-control structures and huge catch basins.
Mother Nature’s healing process continues too, but will take many years more to repopulate the Engleman spruce and subalpine fir that once covered the hillsides of Huntington Canyon. 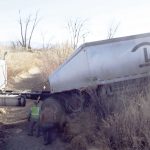 The truck came to rest as it bridged a dry canal. Rick Sherman, Sun Advocate Reporter